Many clinical trials began at the dawn of the Great Depression (1929) and continued through the end of World War II (1945). After that, a review of the studies brought several years of whirlwind changes to clinical research regulations.

1932: The "Tuskegee Study of Untreated Syphilis in the Negro Male" begins

The "Tuskegee Study of Untreated Syphilis in the Negro Male" was a joint venture between the U.S. Public Health Service and the Tuskegee Institute to follow the effects of untreated syphilis in black men in Alabama. At that time, 35% of the black, reproductive aged population suffered from syphilis and there was no effective cure. The study followed 600 men. 399 of them had syphilis before the study began, and 201 of them did not. In exchange for participating, the men were given free meals, medical care, and burial insurance. None of the participants were told that they had syphilis. Instead, they were told that they were being treated for 'bad blood', a colloquialism used to describe any number of ailments including anemia and fatigue. The subjects were never treated, even after penicillin became proven as an effective and easy treatment for syphilis (1945), and were not told that they could opt-out of the study at any point. 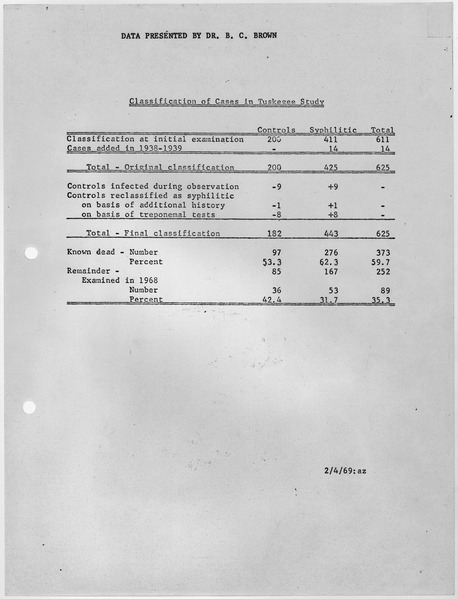 Sulfonamide drugs were the first systemic antibiotics. It treated a wide range of bacterial infections and was very effective against infections caused by streptococci and other cocci. The active molecule was called sulfanilamide (sulfa, for short) and was frequently used in the dye-making industry. The drug was available to anyone because the patent had expired. This resulted in the sulfa craze where many manufacturers produced immense amounts of sulfa. No testing requirements existed at that time. As a result, 107 people (including 34 children) died from diethylene glycol poisoning from an improperly prepared batch of sulfa medicine in 1937.

The Federal Food, Drug, and Cosmetic Act was created in response to the sulfa craze. It replaced the Pure Food and Drug Act of 1906. The Federal Food, Drug, and Cosmetic Act required new drugs to be proven safe before they were marketed to the public. It also authorized factory inspections, extended FDA control to cosmetics and devices, and authorized standards of quality for food. 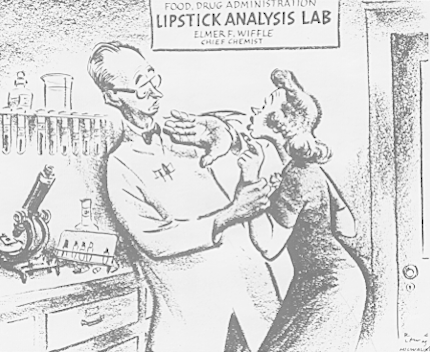 This cartoon expresses public concerns about color additives in cosmetics and the need for scientific investigations to establish safety. The caption reads: "No, Doris, lips that touch Fire Plug Pink shall never touch mine." Image courtesy of U.S. National Library of Medicine at http://1.usa.gov/1FTDDBF

From 1939 to 1945, the Nazi's performed experiments on concentration camp prisoners. These studies were meant to prove the racial ideology of the Third Reich, help the German militia in combat situations, create new weapons, and aid in the recovery of injured military members.

Josef Mengele was one of the leaders in the concentration camp experiments. These experiments were unscientific and conducted without consent. One of Mengele's experiments involved injecting blue dye into brown eyes in an attempt to change eye color. Other Nazi experimentation crimes involved:

The Nuremberg trials were a series of 13 military tribunals held by the Allied forces after World War II had ended. The sole purpose of these trials was to bring Nazi war criminals to justice. The first Nuremberg trial began on November 20th, 1945 and ended on October 1st, 1946. It tried 23 of the most important military and political leaders of the Third Reich. Adolf Hitler and several other criminals were unable to be tried because they had committed suicide or fled.

A different Nuremberg trial was held for the doctors. The "Doctor's Trial" concluded on August 20th, 1947. The defendants in this case were charged with murders, tortures, and other atrocities committed in the name of medical science. Josef Mengele evaded capture, but Karl Brandt (Adolf Hitler's personal physician and Reich Commissar for Health and Sanitation) was sentenced to death by hanging.

View of the defendants in the dock at the International Military Tribunal trial of war criminals at Nuremberg. Image courtesy of http://bit.ly/1EOyUzJ

In May of 1947, Dr. Leo Alexander submitted six point that defined legitimate medical research to the Counsel for War Crimes.  The "Doctor's Trial" verdict adopted the six points and added another four points to them. These ten points comprised the Nuremberg Code. The United States Department of Health and Human Services later used the Nuremberg Code and the Declaration of Helsinki as the basis for the Code of Federal Regulations Title 45 Volume 46. The ten points of the Nuremberg Code include such principals as informed consent, absence of coercion, beneficence toward study participants, and more. All ten points can be found here.

The first trial using properly randomized treatment and control groups was executed in 1948 by the Medical Research Council. It involved using streptomycin as a treatment for pulmonary tuberculosis. This trial also used the blind assessment method, where neither the patients nor the researchers know which treatment group each patient was in at the time of the study. This enabled an unbiased analysis of the results.

Stay tuned for the next edition of The History of Clinical Research: 1950 - 1980